How Can Small Business Participate On Amazon Prime Day Amazon PRIME DAY BEGINS ON JULY 16TH AT 3 PM!!!
What is Amazon Prime Day?
Think BLACK FRIDAY, but EXCLUSIVELY on Amazon.
Over 150 million people expected to shop for an estimated 1 million deals with its sellers. Amazon is the #1 leading eCommerce platform in the world, so it's only right that they created their very own shopping Holiday.
Amazon Prime Day is exclusively for its Prime Members who get to reap all the discounted rewards for 36 hours beginning July 6 - July 7.
It's also the first Prime Day with Wholefoods, Amazon's latest acquisition.
Amazon is offering Prime members a $10 credit when they spend $10 or more at Whole Foods between July 11 through 17.
Whole Foods is also offering deals on grocery items, and doubling the cash back bonus to 10% from 5% for Amazon Prime Rewards Visa cardholders.
This is an even bigger opportunity to lock more Wholefood shoppers into their membership.
This is pure marketing genius from a Branding perspective for Amazon.
They get to showcase to other competing retailers such as Walmart, eBay and Target their retail might and the sales generated is just the icing on the cake. Prime Day is also used to advertise their very own products and gain new members through their subscription program which is a requirement to take advantage of all these amazing deals. Sales are estimated to gross 3.4 billion this year for Prime Day, though Amazon does not disclose revenue from previous years.
The long-term goal for Amazon is to gain new members to its $119 annual free-shipping program and strengthening existing customers relationship.
This is a model I believe we can all learn from as small business owners.
Over $10 million new members subscribe annually from this model.
How are you re-engaging with your customers?
How are we acquiring new customers and clients?
Amazon tested out its inaugural Prime day back in July of 2015 to celebrate their 20th anniversary. The day was designed to replicate the most popular shopping holiday, Black Friday. For Amazon's loyal Prime Customers and gained more sales than their November deals.
I personally love the fact that Prime Day created this sense of urgency and everyone wants to take part, even if the savings are minimal. I was able to score a Dymo Label Printer last year for almost half the regular cost with a few office supplies. People were also shopping for back to school supplies and upcoming Holidays. 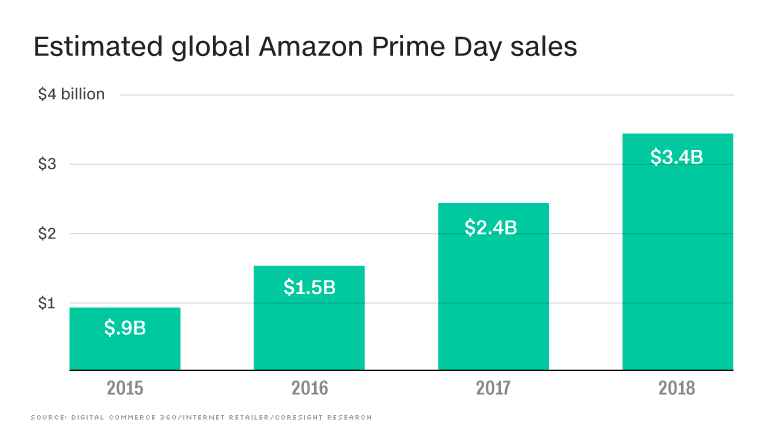 Competitors such as Walmart, for example, debuted new apps and online tools for back-to-school shopping, including a 3D virtual experience called "Buy the Room," and deals on school supplies. Target also announced a one-day sale to rival Amazon on Tuesday for "everyone—no membership required."

How Can You Participate On Prime Day?